Model, contributing editor, and American TV presenter, Alexa Chung takes the world by storm with her clever fashion takes and personal style. Although she may have a typical model body—tall, slender and fair skinned, she does not dress as a typical fashionista. Her boyish combat boots, boyfriend cut denim shorts and choppy short hair causes her to have a rougher, less feminine look. Her look in this spread contrasts sharply with her edgy demeanor.

This next photo is an up close of Chung and a mysterious male figure. Though Chung’s outfit can barely be seen, she is wearing a crème colored turtleneck that flows into the background color of the sand. Chung’s hair is placed up in a ballerina bun with her bangs flowing on top of her face. She is staring at the camera in an almost seductive way. The background of the beach is a blur and blends in with Chung’s skin tone. 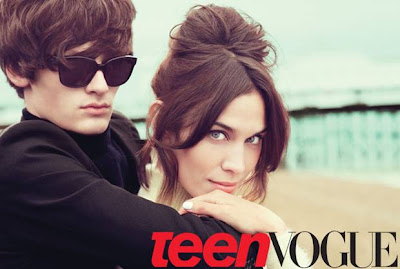 The final photo from this shoot is a close up of Chung. Only one of her eyes can be seen, her short, simple, brown hair covers the other. She is staring at the camera and smiling which brings out the brightness of the yellow flower she is holding. Her white shirt pops out with the green background and the black bows add a touch of girly essence. 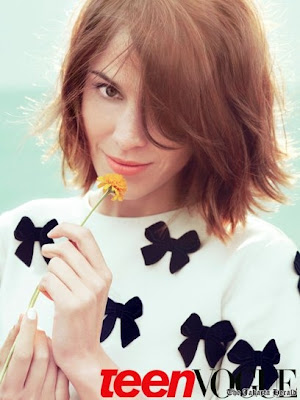